Why Your Digital Future Will Depend on Blockchains

Blockchains are the underlying technology for Bitcoin and other cryptocurrencies such as Ethereum. Blockchains have the potential to revolutionize the way we transact business and interact with each other. However, if you are not caught up in trading or investing (some even say gambling) in cryptocurrencies, then why should you care?

The answer is that Bitcoins are just the tip of the iceberg in terms of how blockchain technology will both disrupt and transform many of our day-to-day future digital interactions. In fact, CoinDesk (a leading news site specializing in Bitcoin and digital currencies), has a bold headline prediction that blockchain value will continue to grow beyond POCs in “Don’t HODL, BUIDL: How Blockchain Tech Will Add Value in 2018.”

There are detractors and cautionary tales that are reminiscent of the dot-com bubble in the late 1990s; while the Internet survived and thrived, many other dot-coms startups, famously, did not. Anyone following the headlines knows that Bitcoin pricing is very volatile with huge swings from $5,857 on November 12th to a high of $19,343 (up 330% ) on December 16th, only to drop by 50% to just over $10,000 the following month. It takes a strong stomach to stand that roller coaster ride. Two additional CoinDesk headlines are indicative of the everyday stories and buzz: 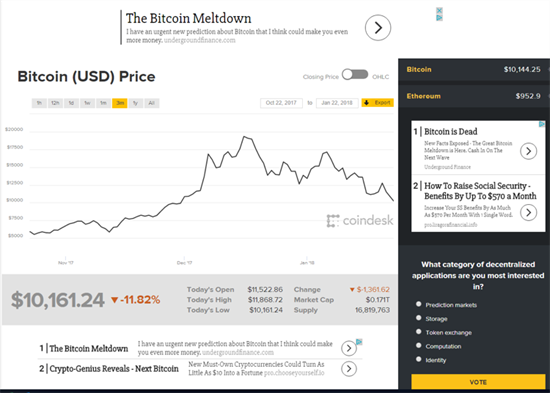 The Bitcoin craze has popularized blockchain technology, which has been called both “the next big thing” and the “next evolution of the Internet”. In this blog, I will attempt to answer these two questions:

A good place to start is a TED talk by Bettina Warburg: How Blockchain Will Radically Transform the Economy: https://www.youtube.com/watch?v=RplnSVTzvnUMs. Warburg explains how, as societies evolved and began trading with each other, they came to rely on institutions such as banks and government agencies to establish trust, regulation, and control. These brick and mortal buildings were also very safe and secure.

As the Internet has become pervasive, these institutions have adapted to online commerce. However, highly publicized security breaches and identity theft are severely eroding consumer trust in e-commerce. From the inception of fire, all technologies can be used for both good and evil. The bad guys (both nation states and organized crime) are now using cyber attacks as their weapon of choice. As reported by the 2013 Europol Serious & Organized Threat Assessment, the “total global impact of cybercrime [had risen to] $3 Trillion, making it more profitable than the global trade in marijuana, cocaine and heroin combined.”

So, what is exactly is blockchain?

Ms. Warburg provides a simple definition, “Blockchain is a decentralized database that stores a register of assets and transactions across a peer-to-peer network”.  The network is open and distributed and provides a public registry of who owns what and who transacts what. The transactions are secured through cryptography and, over time, that transaction history gets locked in blocks of data that are then cryptographically securely linked together in a blockchain.  This provides an immutable and secure history that is replicated across every computer in the network, which makes it very difficult to forge or change.

She utilizes a simple analogy of buying a used iPhone on EBAY. How can you be sure who you are dealing with, whether the phone will work when you get it, and what if the seller takes your money but never delivers the phone? Blockchain has the potential to transform economics by lowering uncertainty and increasing trust in each of three key aspects:

The real elegance of the technology is that people don’t need to know or trust who they are dealing with. Each can monitor the shared reality. Warburg uses the analogy of Wikipedia where multiple sources can all contribute and there is a history of all changes, but only one shared reality at a time.

Think of the peace of mind if you know that you can trust that when you are buying something of value (whether it is a luxury item, medicine, or food) there is no fraud or danger of tampering along the way.

Many other applications other than Bitcoin are now planning to utilize blockchain technologies. Here are three examples:

Blockchains can authenticate the parties, attest to value of an asset, transfer value, be a store of value, and a medium of transacting and exchanging value, and the ability to trust that the other party will abide by commitments.

In his book, The New Digital Age, Eric Schmidt, CEO of Google at the time of publication, said, “We have often described the Internet as a ‘lawless space’ ungoverned and ungovernable by design. Its decentralized makeup and constantly mutating interlinking structure make government attempts to ‘control’ it futile” and that “Identity will be the most valuable commodity for citizens in the future, and it will exist primarily online”.

Effectively, blockchain is a new TRUST PROTOCOL. Blockchain does offer the potential for the 2nd generation Internet; an Internet of value as opposed to the current Internet of information.

And blockchain may be the key technology to harness the Internet-of-Things. Today, there are just over 7.5 Billion people in the world and that is estimated to be 8 billion in 2020. However, in 2020, there will be an estimated 50 billion “sensors” in smart homes and smart cities and smart industries.

In conclusion, trust and technology will be needed to avoid the doomsday scenario of cyber warfare and criminal attacks. Blockchain technologies offer the best potential to be the trusted solution. While we are in the very early stages, and there will be a lot of experiments and failures along the way, I agree with Jalak Jobanputra in “2018: The Year Blockchain, AI and IoT Converge” when she wrote, “we have started an inevitable march towards that future, one that will be even more transformative than the internet was.”